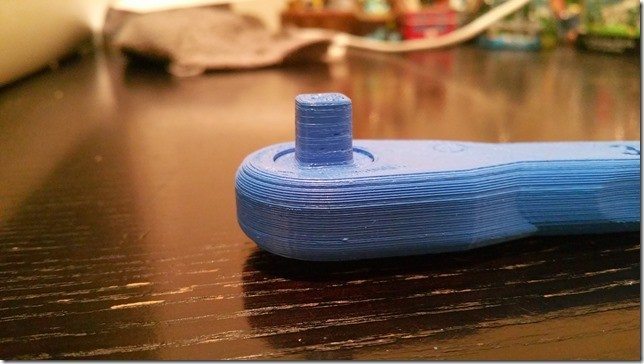 It took me a solid two years to finally cough up the coin for a 3D printer and fact is nowadays a decent home/hobbyist 3D printer can be had for as little as $400. I bought an XYZPrinting Da Vinci 1.0 from NewEgg just before thanksgiving for the impressive price of just $399.  Now, I know what you’re thinking, for $400 there’s got to be a catch and there was.  With the DaVinci line of printers they are coded to use proprietary filament cartridges which fetch a premium on the market.  I know what you’re thinking here too .. that means it’s more expensive, isn’t it!  Well, it is but at the same time you’re paying a premium for quality control and you’re supporting a company that is delivering some pretty innovative products at a pretty impressive pricepoint.  I mean the 1.0’s have a 7.8”x7.8”x7.8” (that’s 200mm)  build area, can do 100 micron resolution layers and is supposed to print in both ABS and PLA.  The construction of the product is solid.  When compared to many of the popular kits that are built out of laser cut wood, this machine is really impressive.  It’s also an enclosed device so noise is manageable.  However, much to my dismay the DaVinci can’t actually do PLA out of the gate and there was no PLA cartridges (until recently).  Word on the various internet forums is that PLA is available now on some devices with the proper print head, if your device didn’t come with the correct print head then it’s a $100 upgrade. Then you start to realize although these cartridges are great the color choices compared to what’s on the market is lacking, severely lacking in fact.  So what do we do? Well, it turns out all of these 3D printers in the fused filament family are pretty much the same, built off pretty much the same design and using much of the same open source technology and the DaVinci is no different.  As a result a number of hackers have come up with customized firmware builds built off of the wildly popular Repetier firmware for the DaVinci.  Allowing you full control of your 3D printer and the ability to tweak the printer till your heart’s content? But Jess what’s that Dirty Secret? Well here it is..

If you think you’re going to buy a 3D printer off the shelf and start building NASA wrenches then sadly you’re mistaken.  Now you will likely be able to build a NASA wrench right off the shelf but the quality is probably not going to be where you’d expect. The fact is, 3D printing is all about tweaking and tinkering.  You’ll be able to print some pretty cool objects, like moveable toys and gyroscopic statues but  it will take some tweaking of the settings and calibration of the print quality to get it just right. But once it’s right, it’s right and it’s just mild tweaks from there.   So if you’re intimidated about breaking your new expensive toy and worried about tweaking it then 3D printing isn’t for you.  But if you’re someone that looks at something and says “hrm… how does that work” followed by “you know, I better I could make that better if I just …” then 3D Printing is TOTALLY FOR YOU!