Last week myself and Carlos attended HostingCon 2007. This was my second HostingCon and Carlos’s third. HostingCon is the premiere annual webhosting event where hosting providers worldwide gather to discuss the industry, technology and general hosting business matters.  One of the greatest things about hostingcon is that you get to network with your peers (competing hosting providers), vendors and industry experts and share information. I love to talk hosting and it goes without surprise that many of the other hosts do as well. So for me, HostingCon was 3 days full of talking shop!

We gained alot of really good information from HostingCon and over the coming months we’ll be announcing a lot of new partnerships as a result of some of the meetings we had during HostingCon. With that said, let’s check out the pictures.

A big part of hostingcon is meeting the guys you talk to from time to time on the various hosting boards or guys you compete with on a regular basis. It’s hard to call them competition. Although we all compete in the same market we’re not all competitors. I think Takeshi from DASP summed it up best when I asked him who does he see as his competitors. Takeshi’s response was “Well, it depends on how you define the universe” and he’s right.  In VPS hosting we have one competitor, in shared hosting another, in managed dedicated hosting, yet another. So there’s not really one competitor. It’s kind of like BBQ sauce. My sauce is going to taste best to some, to other’s it’s going to be someone else’s sauce. We all mix our sauce a little differently.

Anyway, Here’s some of the guys we ran into during hostingcon and spent a good deal of time talking with: 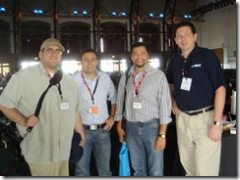 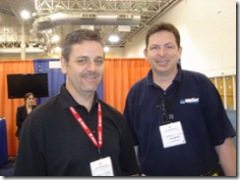 I know what you’re thinking, is that Russell Crow? Sorry, it’s actually Joe from ViuxHosting.com. Not pictured is his partner J.T.

These guys are really nice guys and we had some great conversations about Virtuozzo.

I don’t have pictures of some of the other guys but would be remiss if I didn’t mention them. There was Takeshi from DiscountASP.NET (We talked about the whole Google PPC thing and had a lot of great laughs over it), Sharon from EmpireHosting.com, Ben and Alex from HostNine.com, Eric from ServerIntellect.com to name a few.

It’s amazing to see how much everyone shares in the same headaches and how eager everyone is to help one another out. Kudos to HostingCon for bringing the hosting community together for 3 years straight.

HostingCon’s crown jewel is their Vendor Expo, nearly 100 vendors that service the hosting industry were on site and exhibiting their services and software. 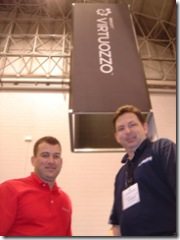 That’s Mike Riolo, Director of Hosting Sales for SWsoft posing in front of a Virtuozzo Sign. We use Virtuozzo to power our Windows 2003 VPS Hosting Solution. 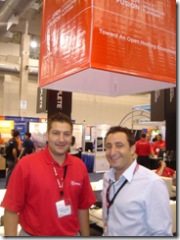 That’s Marco from SWsoft. Marco works in the Hosting Sales side of SWsoft and talks Hosting 24/7. 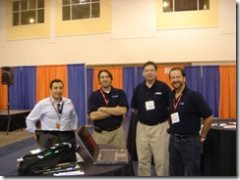 That’s Carlos, Tim Uzzanti from Smartertools (Formerly of CrystalTech), myself and Jeff Hardy also from Smartertools. Smartertools was on site discussing their newest products and upcoming software updates.  We’re very excited about the new versions of SmarterMail, SmarterStats and SmarterTicket due to come out from SmarterTools and will be releasing more information on these products when we can.

The Guys taking PHP based E-commerce to the next Level

Meet the guys from CRE Loaded E-commerce. They were on site promoting their application to hosts. We’ll be working with these guys to provide a Windows Hosting solution for CRE Loaded and look forward to working on that. 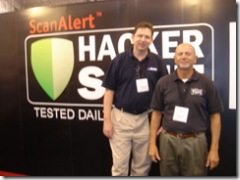 That’s Michael Ayers from ScanAlert / HackerSafe. I’ve met Michael a few times now and have had some great conversations with them regarding website security. The ScanAlert guys are definitely on top of their PCI compliance testing and are the recommended vendor of choice for PCI scanning. 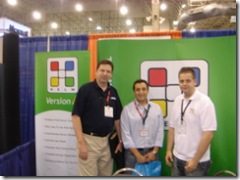 That’s Chris Danks, Sales Representative manning the HELM4 booth at HostingCon. Adam and Mark were also there from HELM and we had a few conversations about the next generation of HELM and what new features to look forward to.

These are the guys (and gal) that know the Hosting Industry and follow it pretty closely. Microsoft is one of the companies that had a large presence at hostingcon and were in fact on of the primary vendors/supporters. With Microsoft announcing their new commitment to Software + Service (SaaS), it’s no wonder Microsoft is making such a major presence in the hosting space. In fact, I’m told Microsoft Hosting is starting to take share from Apache and it’s anticipated before long that it will surpass it.

The Go-To Guy At Microsoft Hosting

That’s Tito Leverette. Tito is a Hosting Evangelist for Microsoft and formerly an engineer for Interland. We’ve been working with Tito for several years now and find his insight and experience invaluable.  I think we talked to about 12 different people from Microsoft during the event about everything from IIS and SQL to SharePoint and Exchange. I believe by the end of the event everyone there knew us by first name.

The Guy that wrote the book on IIS7 (well is writing) 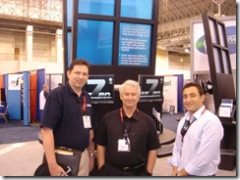 That’s Microsoft’s, Brett Hill in the middle. Brett is writing ‘the book on IIS7’ and has been instrumental in our launching of IIS7 hosting.  You always think you know a program better than anyone else out there and then a guy like Brett comes along and reminds you just how much more you need to learn.  Brett’s truly the expert on IIS7 and you can often find him posting over at www.iis.net.

The People Behind The WHIR 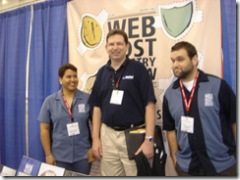 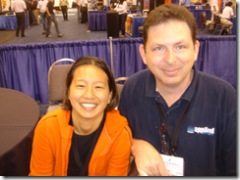 That’s Isabel Wang from www.isabelwang.com. Isabel is a noted Hosting Industry Expert and often called upon to discuss the latest happenings in the hosting industry. I’ve had the opportunity to have a handful of conversations with Isabel this year and find myself walking away each time going “WOW! I never really thought of that”. Isabel has been involved the hosting industry longer than me it seems. She used to run ispcheck and we actually bought ads from them back in 1999. After that she went to work for EV1 and today she consults for several hosting companies and vendors looking to enter the hosting market.

The event was fantastic. Last year the event was held at the Mirage in Las Vegas and I love the Mirage. But it just wasn’t very good for networking. This year there were fewer people in attendance than last year but the quality of conversations and openness to networking were fantastic.  Interspire.com coordinated the event (for the third time) and did an excellent job hosting it in Chicago this year. We met so many people at this event this year that it was really a success, some of the people not mentioned or pictured are VMWare, PinnacleCart, SEDO, CPanel and dotnetpanel to name a few.   In addition to the great networking there were also several very good sessions, panels and keynotes on things from Software as a Service to Social networking to the place next generation hosting technologies have in today’s hosting environment. Needless to say, I have enough blog information for the next several months.

PS: I’m sorry if some of the pictures are fuzzy. The problem is the Sony DSC-T1 I was using. It’s my backup digital camera and has a pretty slow shutter on it.

2 Replies to “HostingCon 2007 and AppliedI.net”