Google and MSN both have a streetview product on their maps now. They have these little cars with 360 degree panoramic cameras driving down various streets taking digital pictures and then you’re able to view these street level pictures online.

To see an example of this take a look here:

That’s the main entrance to the NAP of the Americas where much of our hosting infrastructure is housed. (I have some aerial pictures of this same facility in another blog posting).  I know what you’re think, big deal now I can see the front of the building. Well if click down the street a bit you’ll see the painting crew in action: 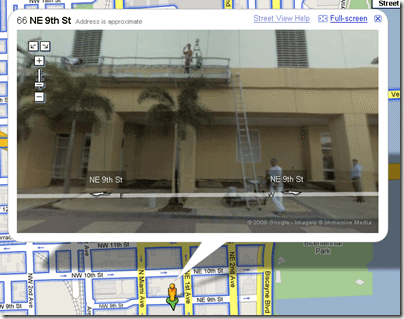 Okay, that’s mildly entertaining. But you say, “Well Jess, what does this have to do with Crime Stoppers?”.  You see, we’re catching people in action, in their normal every day activities..

So over in San Francisco, Here’s a guy caught mid air in what appears to be a little Breaking and Entering action:

And if you live at the above address in San Francisco you’ll probably want to zoom in and see what our cat burglar looks like:

Ron Johnson actually sent me the above image as well as one where an obvious drug deal was caught on camera too. Unfortunately those images have been pulled since then. But here’s a couple blogs with images that show just why Google pulled those images:

One of my favorite sites for this type of information is googlesightseeing.com. There’s everything from nuclear subs and purported cruise missiles to post Hurricane Katrina images of New Orleans.  I’m told that the government has started shutting down some locations or limiting the detail at which they can be viewed but there’s still many sites on the Internet devoted to sharing interesting images that people have spotted on Google and Live/MSN Maps. Here’s a few links:

So there we have it, thanks to the Web 2.0 evolution we’re able to see everything from drug deals and B&E to locating WMD’s (well maybe not WMD’s, sorry George). But you get the idea.