It’s no secret I’m a big fan of Virtuozzo virtualization software from swsoft.com. I think for a hosting platform it’s really the best solution on the market today and we’re basing our entire VPS hosting solely around it.

Recently in preparation for our release of windows VPS hosting (very soon) we brought everything up to date including taking Virtuozzo to 3.5.1 SP1.   Normally, an SP1 means major changes and this is no exception.

Virtuozzo 3.5.1. SP1 adds a ton of new features but my favorites are:

Added was the ability to use dynamically increasing diskdrives (they call them compact disks). In the Linux version a client could subscribe to a 20GB Diskspace allocation and would only use as much space as their actual usage was. This means total disk usage would be lower as most clients really never use their total allocation. In fact the accounts I resized today all were 20GB partitions and the average actual partition was under 4GB.

While we’re on diskspace, Virtuozzo is just bad ass. OS virtualization doesn’t need to create duplicate copies of the OS so when a client gets a 20GB partition only about 300MB or so is actually used for the OS the rest is all shared with the host machine.

Memory Control and Allocation in Virtuozzo

This isn’t really a feature of SP1 but probably improved within the patch somewhere so I’m including it here. Below is an image of a client’s virtual node (yeah we use dual processor, dual core xeons and serial attached SCSI drives in our VPS servers). The client was initially set at unlimited memory because we wanted to see if memory was a problem for his VPS. We then switch his memory from unlimited to a cap of 384MB.

The image below is pretty cool he was uncapped on memory so the line stayed at the bottom (let’s say 10%), once we set a cap it jumped up immediately about 70%. In real-time.  How cool is that. Dynamically adjusted his memory allocation WITHOUT having to reboot his VPS. Zero Downtime, that’s what it’s all about. 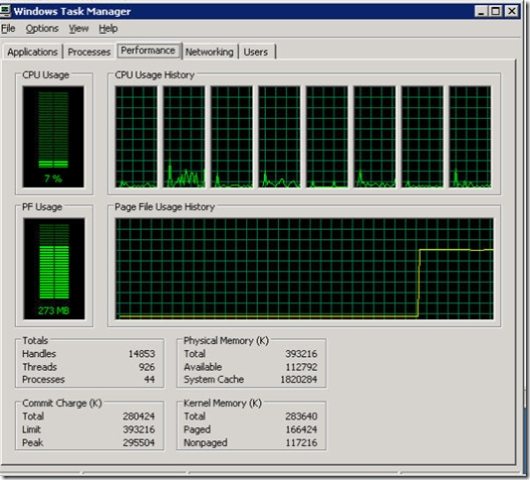 Your VPS can now be a VPN Client

A big request has been that your VE be able to connect to a VPN. Until now this hasn’t been possible but now it is. I’m told in Virtuozzo 4.0 you’ll be able to run a VPN server too!

With Virtuozzo you can set a CPU share so that each VPS gets a certain amount of the CPU, larger plans can have a larger slice, etc.  Now you can also set a max CPU usage. What’s this mean? Means you can set a cap on just how much maximum CPU they can get. With Virtuozzo a VPS can burst to 100% available CPU (available CPU is defined as total CPU minus the sum of guaranteed CPU across all active VPSs). So now you can set it so that VPSs can only burst to 25% or 50% total CPU, etc. Why is this good? Keeps one VPS from bogging down the total available CPU and also allows you to offer a higher burst limit to larger VE’s.

Each VE has it’s own Console

You can manage Windows Firewall Rules!

Yeah, I’m not sure just when this was added honestly because I assumed it just didn’t work at all but you can now define Windows Firewall rules within your VPS.

Here’s a tip: don’t forget to setup the exception for terminal services before you enable your windows firewall! If you forget to do that you’ll find yourself locked out. Fortunately though with the Virtuozzo Power Panels enabled (https://yourip:4643) you’ll be able to log into that and turn off the windows firewall service and can then go in and fix your rules so you’re not completely locked out.

There are other features added that are equally cool but not really relevant to my needs or those of my clients but for completeness: Ethernet Layer Network Adapter Support is supported so that a NIC can be assigned to a single VPS. Windows 2003 Network Load Balancing support has been added, Teamed Network Adapters are now supported, Citrix Presentation Server supported and they added new CLI commands.

I know it seems like I’m paid for this stuff, but I’m not. I’m simply excited about technology when it’s “BAD-ASS” and Virtuozzo is simply BAD ASS Technology. Virtual Private Servers are the future of shared hosting, reseller hosting will slowly evolve into Virtual Private Server hosting as resellers continuously want more control of their servers. Dedicated Hosting will be replaced with Dynamic Dedicated Servers and shared hosting will all run within dedicated VPSs. I believe SWsoft is on the leading edge of this technology and that’s why we use them for our system.  I blog about it because I’m excited and I want the world to know just how cool it is. Ofcourse, if the world wants a windows vps hosting account then I hope they select Applied Innovations and that’s