I have a small beta tank on my desk (it used to have a couple of those Brookstone frogs in it, but they’ve long moved on) and recently my Beta decided it was time to visit ‘the other side’.  So I thought this would be a great opportunity to demonstrate my keen abilities of ‘Office Voodoo’.

To perform this you’ll need the below items 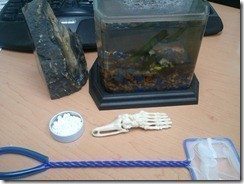 Once you’ve assembled your components. First, take one of the mints and dissolve it within your mouth (Two if you had anything garlic for lunch).

Next tap the tank three times with the magical foot of revigoration.  Just in case your Beta awakens from his state.  Still in a state of restful peace? Yeah, mine too.. On to step three..

Step three. Using the net of vitality, remove your Beta and prepare his remains within the waste basket of salvation (it’s round, probably has a plastic bag in it and other odds and ends of refuse).

Step five. Clean the fish tank out really good and fill it with room temperature water.

Step six.  This is really important, use the drops of life (also known as water conditioner) to prepare the water for the next step. If you don’t do this, your fish will most likely return to a state of restful peace and you’ll have to perform this procedure over again. 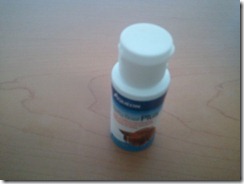 Step seven, tap the magical foot of revigoration on the vestibule carrying our new life host. Did I not mention the life host? This is the Beta fish that our Beta will be transferred to.  I got mine from Petsmart for $6. 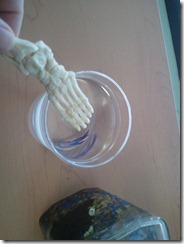 Finally, transfer your beta from his vestibule to his new tank using the net of vitality and your beta is alive! 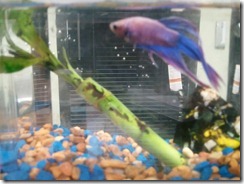 Now I know what you’re thinking.. “Jess, if that’s the same Beta as the one that died .. I mean was in a state of restful peace then why’s it a different color?”  Well, that’s simple really, do Zombies have the same color as they did when they were living beings? Of course not.. neither do fish zombies!

Lastly, feed your new fish twice a day and change half his water once a week and you won’t have to perform this procedure again.