Microsoft released Hyper-V Server 2008 yesterday and it’s now available for FREE download.  This is a bare-metal standalone hypervisor, meaning that you don’t install a host OS on the machine before installing this. You just install this and then create your VM’s and install the OS of choice into your VMs.

I think the best way to think of this is as Server Core but with only one role: Virtualization.  Or think Hyper-V without the overhead of a full Host OS.  Here’s a few cool facts:

The maximum number of guest instances is 192.

The maximum number of Logical processors supported is 24.

The maximum amount of Memory? I don’t know but I know it supports more than 32GB!

Licensing for Hyper-V Server is free however you’ll have to have a license for each guest instance of Windows you install. The screen cap below shows the different licensing options for Hyper-V: 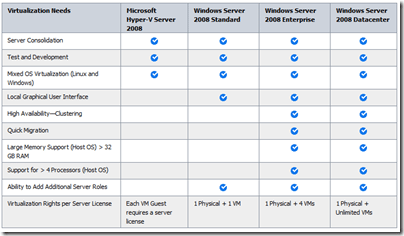 (my advice: Go datacenter and save on licensing).