I was adding people to follow on Twitter today (I have yet to figure out what to twit about) and after a few adds and tweets I got this email today: 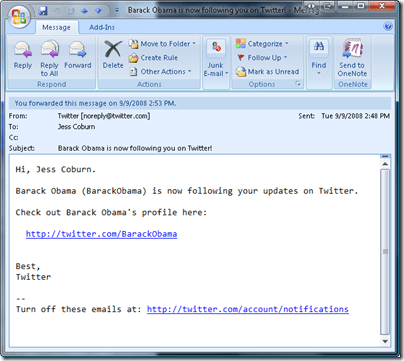 Finally, a Presidential Candidate that recognizes my brilliance!!  Ahh, it’s nice to have followers :)  Now I just need to find out his gamertag on xbox live so we can play some COD4 :).

In all seriousness though I am truly amazed with the way the Presidential candidates have embraced the Internet and are using it to spread their message and the fact that they are using social networking as one of these tools is even more amazing.

Back from the back burner.

As I mentioned earlier I had shelved this post because it wasn’t that interesting.. It’s cool but not really interesting. Anyway, I did start following Barack Obama on twitter because I was curious what the campaign would post. Before I continue, no I don’t really believe Barack is reading my tweets.. He should but he’s probably not.. but he’s probably is subscribed to my blog ;). Anyway, Today they tweeted about an official “iPhone App.”!!. 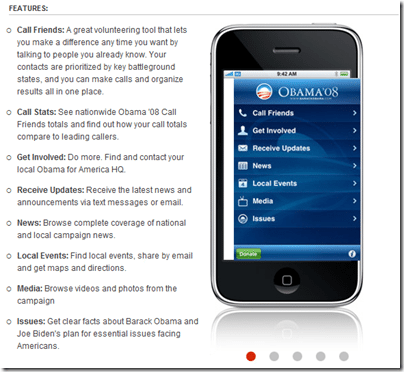 Now this is clever and really shows how technology and the Internet is changing the world.  Back in 1988 we had a student project to volunteer for the campaign of a candidate running for election. At that time I opted for Dukakis in his Presidential run. I had 3 jobs:

1. Hang door hangers on all the houses in my neighborhood (after sitting for days in my bedroom my younger sister went out and hung them all out for me).

2. Hold a sign at a rally for Dukakis at a local union office and wave as the Bus carrying Dukakis comes in. Turns out I got to shake his hand be on TV, so for a high school kid this was impressive.

3. I was handed about 20 pages of computer printouts (the crappy old green and white paper used in 9 pin dot matrix printers), a script to read and shown to a phone where I was to sit for hours and make phone calls.

From this experience I learned a few things:

1. Dukakis was a short man but had a solid handshake and made a point to make eye contact, even with some punk high school kid wearing his cool high school mascot jacket. I was impressed.

2. I’m not one for hanging door hangers but my sister will gladly do it for free!

3. People don’t like to be called during dinner time. If you call a stranger’s house about a candidate they don’t care for they will probably rip you a new one and scream vulgarities at you and finally many people will just say “Yeah, we’re voting for him” just to get you off the phone.

4. Politics was not for me.

The reason I mention this is that the Barack Obama campaign continues to impress me with their grasp of the Internet and how they are using it to reach voters.  The Iphone app is just pure genius. Instead of setting up a phone pool and trying to get people to come in and make these calls to strangers (that are going to curse them or just say yes for the sake of getting someone off the phone) they are providing a phone app that will allow you to make these calls to your contacts AND provide information upfront on key topics that you’re most likely to get hit with when talking to your friends and contacts about Obama.

This is truly clever. You know I often think back to that first batman movie website. I believe it was the first movie to launch a website to promote their movie. I was amazed with the graphics, the layout, the animation but more importantly excited about what it meant to the entertainment industry and was cool new websites we’d see. So I’m equally excited to see not only what else Obama’s campaign will do with the Internet but how other candidates will continue to raise the bar.

If you wish to pick up the Barack Obama IPhone app you can get it here.

NOTE: I’m not Political. I don’t care who you’re voting for and whether I vote or who I vote for is none of your business. So don’t bother me with political crap.

And a WARNING: Never give the NRCC money as a joke to tease your buddy who thought it was cool he got an award for being such a good republican because you got the award too and you’re a democrat! They’ll never leave you alone and will send you tons of crap awards, pictures, statues, letters, invites, etc. You’d think they’d look at your voter’s registration but I guess not.