It was announced back in December that Netscape would be officially no longer supported as of February 1st 2008, for many they see it as just another forgotten software program but for many others it was much more than that. For me, Netscape is part of the events that got me hooked on the Internet and that eventually led to the start of Applied Innovations (it seems fitting that in the same month Netscape retires, AppliedI turns 9).

In 1994, I was just starting a career in Electrical Engineering at Motorola and had been using the Internet via gopher, FTP and USENET for a while already. I had been using NCSA’s Mosaic browser and HTTP Daemon running on SunOS and already building webpages and applications around it.  NCSA’s tools were nice but simply unpolished.  Then I read this USENET posting:

You can FTP Mosaic Netscape 0.9 Beta from the following locations:

Please make sure to read the README and LICENSE files.

An up-to-date listing of mirror sites can be obtained at any time
by sending email to rele…@mcom.com.

Subject to the timing and results of this beta cycle, Mosaic Communications will release Mosaic Netscape 1.0, also available free for personal use via the Internet.  It will be subject to license terms; please review them when and if you obtain Mosaic Netscape 1.0.

A commercial version of Mosaic Netscape 1.0, including technical support from Mosaic Communications, will be available upon completion of the beta cycle.  Contact us at i…@mcom.com for more information.

That post was dated October 13th 1994, 8:51am and the archived message pulled from google groups.

I quickly downloaded, installed and was AMAZED by this new web  browser and I wasn’t alone.  Here’s a few of the follow up posts from USENET that give you an idea of just how the Internet community accepted the Netscape Beta back then:

As blown away as you may have been by seeing the original Mosaic
for the first time, Netscape is even more impressive.

Besides being faster, easier to use and more rubust than Mosaic,
it elegantly handles news and mail.

– AND…I’m POSTING this from Netscape!

Let’s think of some of the things Netscape did that helped change the Internet:

For many the passing of Netscape is just another antiquated  piece of software taking it’s place in history but it’s much more than that and because of all it’s done and changed for myself, my company, and society as a whole, I say raise your cup of coffee this morning and give thanks to Andreessen and the guys that started Mosaic Communications Corporation and released that very first beta version of Netscape, they truly changed our world! 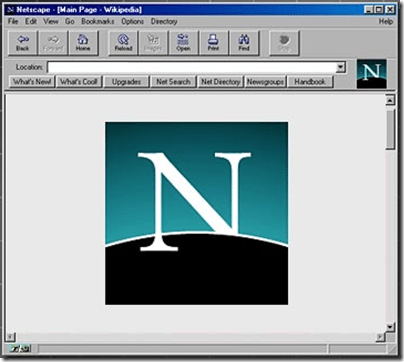 (image from Peter Coffee’s 24 Killer Apps of All Time).