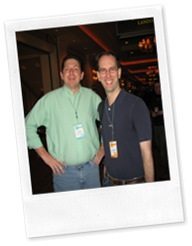 Earlier today, ScottGu (pictured to the right of me and no I’m not about to spit on him!) announced the WebsiteSpark program.

WebsiteSpark is a new program by Microsoft to help independent web developers and designers build on the Microsoft Web platform.  Applied Innovations was selected as one of the first hosters involved in this program and I’m personally excited as the prospects this program means for web developers that have been hesitant to move to the Windows Platform as well as existing developers running their websites on Windows.

The program is exciting because it’s going to SPARK many new businesses and allow developers in the program to increase their business tremendously!

Removing the roadblocks to Windows as a Web platform hosting.

The most common compliant you’ll hear when you ask someone why they don’t use Windows hosting is:

Windows is too expensive! The licensing and software costs are too much for me!


The great news is WebsiteSpark removes the roadblocks! Once accepted in WebsiteSpark you’ll gain FREE (as in $0.00!) access to the following software and licenses:

But it’s not just about FREE (as in $0.00!) software! You’re also going to get to be part of the Microsoft ecosystem of customers, partners and other Web Pros with complimentary technologies and get free Marketing and Lead Generation!. You’ll also be listed in the WebsiteSpark Marketplace (starting on November 20, 2009) where Web Pros can:

Microsoft is providing the software and business leads, what else do you need to make the move to the Windows web platform? Support!  That’s included too. Some of the support benefits include:

Now as a WebsiteSpark member developer you’ll have access to Free Software, Free Support, Free Marketing / Lead Gen, what’s the last thing you need? A web hosting partner that will provide you the hardware platform and support you need to be successful and that’s where Applied Innovations, the Windows Web Hosting Experts, come into play!

Applied Innovations, as a hosting partner and network partner we’re able to sponsor you in the WebsiteSpark program and provide you the guidance and resources need to make the most of the program. In addition, we’re offering EXCLUSIVE WebsiteSpark discounts and promotions!  For example, you’ll be able to leverage our high availability managed windows vps hosting platform as a base to your hosting business. You’ll be able to purchase a scalable, flexible VPS server that will allow you to increase or decrease your server resources on the fly.

Your websites will be powered on a cluster of dedicated servers with failover clustering backed by a 100% uptime SLA! (As in 0.00 DOWNTIME GUARANTEED). Backups, updates and monitoring all managed for you automatically and seemlessly and a team of experienced Windows Server experts standing by to help you resolve any problems or answer any questions you may have.   In addition, we’re giving all WebsiteSpark developers an additional 10% discount and TWO MONTHS of Free Hosting on any managed Dedicated Server or VPS they select.